Caring for a sick dog... 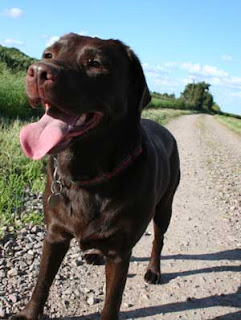 I don't know if it is just me, but I find that more and more dogs get sick now days. Vomiting and diarrhea seem to be the most common symptoms.

Several of my boarding dogs have now had some kind of issues with either vomiting or diarrhea (not just when they stay with me, but while they are at home too) and mucusy stools are a fairly common problem too. I've been told this can be a sign of an irritated bowl.

As some of you know I've been taking care of Jax chocolate Lab (see picture of healthy Jax in 2007 to the right) since early March and she's in a really bad way (see pic further down of how skinny she is now).

The vets and RVC (Royal Vet Collage) think she's got a rare form of IBD (Inflammatory Bowel Disease), but they can't rule out bowel cancer, so she has to go back to have another endoscopy procedure done on Tuesday 30 March, to take a new biopsy, to rule out cancer.

Last time they did an endoscopy on her, she was on steroids (because her regular vet diagnosed her with the most common form of IBD which is treated with steroids), 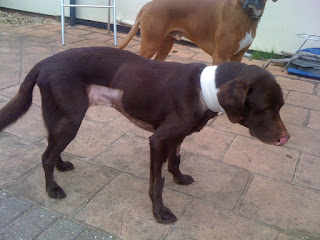 so the negative cancer results, might have been a false negative. So they have to go in and do it again, now that the steroids are out of her system.

Would I say that Jax is getting better? Maybe... The process is so slow, it is hard to tell. The vets have said that it will take a good 2-3 months for her to put her weight back on.

The good news is that she's not throwing up any more, so she's able to keep all her food down. The food that is fed to her through a tube in her neck (see picture to the right). I'm feeding her between 6-9 times per day, depending on how 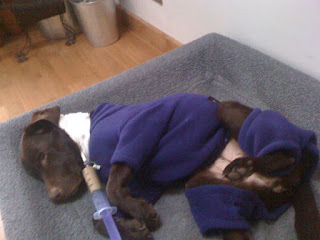 she's doing on the day. Some days she seems more sensitive, so I give her smaller feeds more often and on stronger days I'll feed her a bit more per meal.

She won't take the food (Hill's z/d) through the mouth, so the tube in her neck is the only way to make sure she gets the nourishment she needs. She is interested in other foods, but she can't have them or she might start the vomiting again.

It is more energy draining than you would think to care for someone who is so sick, maybe because you worry so much about them, but also the early mornings to give medicine, the constant 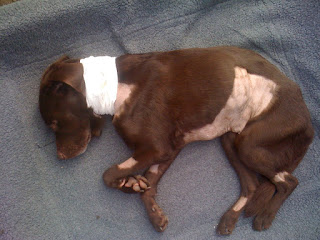 feeding and then more meds, going for lots of short walks so she can come with us (don't want to leave her unsupervised). As soon as I've done a feed and sat down to do some work, it is time for the next feed, or the dogs need a walk, or medicin is needed on an empty stomach, so that has to be planned in half an hour before the next feed, etc etc.

At least she's fairly stable at the moment and not vomiting. I can feel a little bit of meat on her bones now, which is a good sign. Don't like the fact that she's still getting gungy eyes and the hole where the tube is going in is gungy, even though she's on antibiotics...

I took her to the holistic vet, Richard Allport, at the Natural Medicine Centre in Potters Bar on Tuesday. It was mainly a chat about Jax and her personality and a confirmation of what we thought, that she's got an imbalance in her system. She got an acupuncture treatment and he wants her to have homeopathic treatment too, but I am waiting for the all clear from the owner and regular vet for that. Fingers crossed. Richard Allport did not think that Jax has cancer. Lets hope he's right!

Jax has still got the sparkle in her eye, despite being very weak and tired. Otherwise I wouldn't think it was fair to make her carry on, but she still enjoys her life, even when it is in this sick state...
Posted by DogBasics.co.uk Blog at 08:30

Have they considered the other side?

A perfectly nice evening destroyed because of one irresponsible dog owner... We set out for a short evening walk after dinner and everythi...